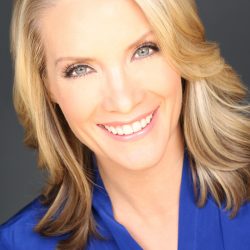 Dana Perino is one of the nation’s most popular political commentators and the co-host and breakout star of Fox’s The Five, the No. 1 five o’clock show and the third most-watched program in all of cable. She is also the author of the No. 1 New York Times best-selling book, And the Good News Is Lessons and Advice from the Bright Side, a thoughtful and inspiring look at life and politics. In the same energetic style that has made her so popular on TV and with audiences across the country, Perino brings a unique viewpoint from her time inside the White House, providing insights into the current political climate that will give organizations a clear picture of the changes to come.

As only the second female press secretary in U.S. history (and the first female Republican) and one of the most widely-respected members of President Bush’s senior staff, she is a keen analyst of the latest political news and an expert in crafting and communicating key messages under stressful conditions. Equally great as an individual keynote or paired with a Democratic counterpart, Perino is a larger-than-life personality as she shares insights and stories about the current political situation in America today.

The Voice of the White House. Dana Perino served as the White House press secretary to President George W. Bush from 2007-2009. An expert on healthcare, energy policy, and female leaders in government and business, she communicates with audiences with the same clarity and precision that gained the respect of the rough-and-tumble White House press corps. Calling on her experience working closely with the president, she also speaks about management and leadership, encouraging peak performance, and fostering debate to encourage better decision-making.

Post-White House. Perino is president of the strategic communications firm Dana Perino and Company and a frequent public speaker on how politics affects people outside the beltway. She spent time volunteering at an HIV/AIDS treatment center in South Africa and has developed a unique interest in the areas of women’s rights and maternal health, especially in Africa. In 2011, she collaborated with fellow Governor Susan McCue to launch Congo Story, a website that shines light on the brutal realities of daily life for women in Africa. She is also the founder of Minute Mentoring, an organization focused on giving professional guidance to young women. Additionally, she serves on the boards of Mother’s Day Every Day, Running Start, ONE Campaign, and Pets2Vets, and President Obama nominated her to the Broadcasting Board of Governors in 2009.

Clear Lines of Communication. Before she joined the White House, Perino was a spokesperson at the Department of Justice. Two years later, she moved to the White House to do communications work for the Council on Environmental Quality. Altogether, she spent more than seven years serving in the Bush administration. Her political experience also includes working on Capitol Hill for Rep. Dan Schaefer (R-CO) and Rep. Scott McInnis (R-CO).

Perino worked as a journalist before turning to politics and is a former commentator for the Washington Post, POLITICO, and National Review.