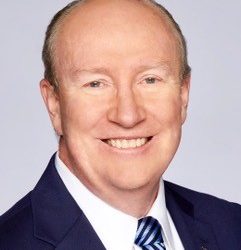 Andrew C. McCarthy is a New York Times bestselling author, most recently, of Ball of Collusion: The Plot to Rig an Election and Destroy a Presidency. He is a contributing editor at National Review, a Fox News contributor, and a senior fellow at National Review Institute. A former Chief Assistant United States Attorney in the Southern District of New York, Andy led the terrorism prosecution against the “Blind Sheikh” (Omar Abdel Rahman) and eleven other jihadists for conducting a war of urban terrorism against the United States that included the World Trade Center bombing and a plot to bomb New York City landmarks.

Andy is featured on The McCarthy Report, a National Review podcast co-hosted by NR editor Rich Lowry. It focuses on legal and national security issues, with particular attention recently to the impeachment proceedings against President Trump, the Mueller probe, and the ongoing investigations related to the origins of the Trump-Russia investigation, including FISA abuse and other alleged investigative irregularities.

Andy provides analysis and commentary on national security, radical Islam, law, politics and culture. His work regularly appears in National Review, including a weekend column on Saturdays. He is a regular guest on the John Batchelor Show, joining John and former Congressman Thaddeus McCotter to analyze developments in the Mueller probe. He periodically testifies before Congress on law-enforcement and counterterrorism issues. He also writes for The New Criterion and The Hill, among other publications. His New York Times bestsellers also include Willful Blindness (2008), and The Grand Jihad (2008). He is also author of the popular e-book, Spring Fever: The Illusion of Islamic Democracy (2012), and of Faithless Execution (2014). He has written several pamphlets in the Broadside series published by Encounter Books, most recently Islam and Free Speech (2015).